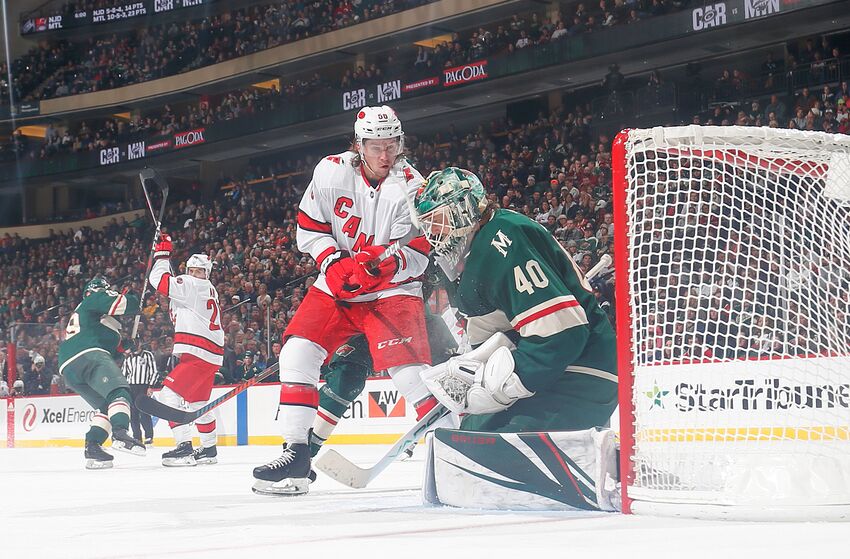 SAINT PAUL, MN - NOVEMBER 16: Devan Dubnyk #40 of the Minnesota Wild makes a save against Erik Haula #56 of the Carolina Hurricanes during the game at the Xcel Energy Center on November 16, 2019 in Saint Paul, Minnesota. (Photo by Bruce Kluckhohn/NHLI via Getty Images)

The Carolina Hurricanes are struggling to remain completely healthy. Erik Haula is once again reported as injured as the team continues its road trip.

The Carolina Hurricanes finally looked like a complete team. Alternate Captain Jordan Martinook was finally back from his surgery. Erik Haula returned from a short stint away from the team to look after his knee. Which led to band-aid guys like Brian Gibbons to be sent back down to Charlotte to let the team fully flex it’s strength and set a three game winning streak.

But just when the band is finally all back together, things started to come unraveled once again. Not unlike Ginger Spice, Erik Haula is struggling to stay and keep the merry band of jerks together. He missed practice yesterday for reasons unstated. But players take breaks and maintenance days all the time.

The real concern was the fact that Carolina had already called up Eetu Luostarinen, who had been a welcomed addition in Haula’s absence before. Eetu subbed in for Haula for who once again missed practice today. That intuition by the Hurricanes to call up Luostarinen paid off because if what Rod Brind’Amour said is to be believed, Eetu just might be a core part of this team moving forward:

#Canes head coach Rod Brind'Amour on Erik Haula (knee): "He's going to be out for a while. … He's not playing any time soon, I don't think."

While that seems ominous and dire news for a player that is only a goal shy of being tied for top of the team in scoring with guys like Andrei Svechnikov, Sebastian Aho, and Dougie Hamilton, take note that the Carolina Hurricanes always overestimate return times for players. After all, Martinook’s original six to eight week recover time ended up being only being four.

If that is part of a underpromise and overdeliver strategy to the fans or a way to give player the maximum amount of time to recover is unclear. Whichever it is let’s hope it is also true when they finally give us a frame of time for Erik Haula’s return.

In his stead both Lucas Wallmark and Eetu Luostarinen will get the chance to take his minutes and prove to Rod Brind’amour that they deserve a role as the third line center. Perhaps years from now we will talk about this being the opportunity that one of these two needed to prove their worth and establish themselves in this league.

Until then Haula’s contributions are going to need to come from the rest of the team. Guys like Brock McGinn and Warren Foegele will have to step up and start contributing more to the team’s scoring. Depending on how long Haula is actually gone, Carolina Might start looking at acquiring some talent elsewhere to fill in for the loss. But that might be a decision to make closer to the deadline.

Question For CC Readers: How much is Erik Haula’s loss going to sting?

Next: What should Carolina do with James Reimer?
Load Comments
Event Tickets
Powered by StubHub
Top Stories