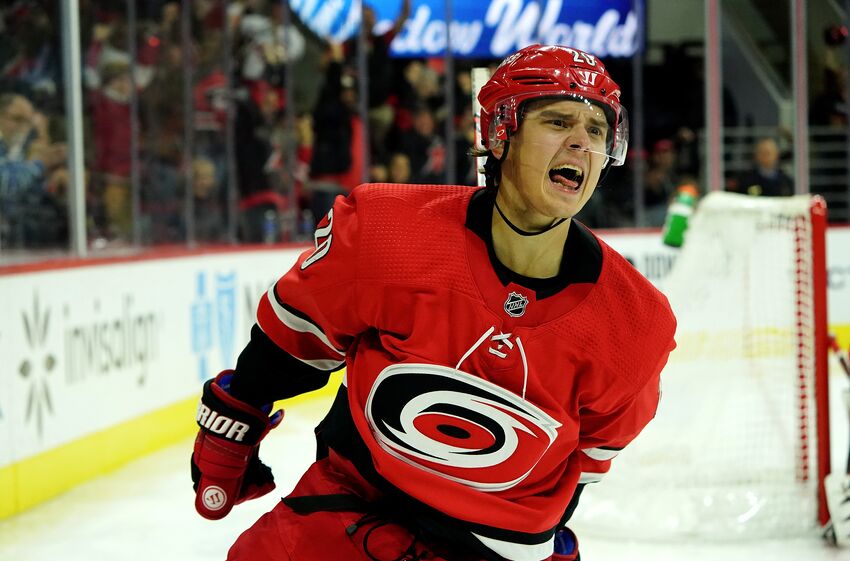 RALEIGH, NC - NOVEMBER 11: Sebastian Aho #20 of the Carolina Hurricanes celebrates his short handed goal during an NHL game against the Ottawa Senators on November 11, 2019 at PNC Arena in Raleigh, North Carolina. (Photo by Gregg Forwerck/NHLI via Getty Images)

We all know how talented the flying Finn is, but just who is Sebastian Aho, and how did he fall to the Carolina Hurricanes in the second round?

On the 26th of July 1997, in Rauma, Finland, a young Sebastian Aho was born. Little did anyone know what a superstar this young man would become. But why did he fall all the way down to 35th overall in the 2015 NHL entry draft if he was going to be so good?

Recently Sebastian Aho’s name became hallmark in the NHL after a great playoff run by the Hurricanes and a offersheet controversy by the overly popular Montreal Canadiens. But that’s not where his story begins.

Sebastian rose to fame in the hockey world with Finland during the IIHF Championships when he put up two goals and nine assists in ten games for Finland. But why didn’t he gain any recognition for his performances? Well, a lot of scouts and fans thought it was more to do with his line mates than with himself.

Patrik Laine would go 2nd overall in the 2016 NHL draft, while Jesse Puljujarvi would be scouted to go 3rd overall but fall behind Pierre-Luc Dubois to 4th overall.

Aho was known to be a clever two way player with an incredibly ability to pass the puck, but no one bought him as an NHL player, largely because of how small he is. The 5’9″ 176 lbs center has never been the biggest of guys.

But what Sebastian lacks in size, he makes up for in speed and smarts. I encourage you to look back at some of his performances as a rookie to see just how good he is on his skates. Perhaps a few of his performances with the Carolina Hurricanes not so long ago as well:

Aho quickly established himself as a fantastic player. In his rookie season he notched 24 goals and 25 assists for 49 points in 82 games, and truly burst onto the scene. While he missed the first four games of his career the following year, after a high hit from Calgary’s Mark Giordano, the Finnish born star would still find a way to put up 29 goals and 36 assists for 65 points.

He was truly a star for the Carolina Hurricanes already then, but was still on the wing and yet to fulfill his destiny.

In the 2017-18 season, Sebastian Aho (who had been playing on his left wing for the first 2 years in the NHL) finally had an audition at center after Victor Rask had surgery. It was good enough to convince then assistant coach and future head coach Rod Brind’Amour to play the young Finn down the middle, and how did that work out?

Sebastian Aho had a breakout year, recording 30 goals and 53 assists as the Carolina Hurricanes returned to the playoffs for the first time in a decade, with their young Finn finally becoming one of the NHL’s top players. He would have a quiet first playoff series against Washington, but would finish with twelve points in fifteen playoff games, helping the Jerks get to the Eastern Conference Finals.

Now in the newest season, Finnish Flash has gotten off to a slow start, recording only Eight goals and Five assists through Eighteen games this season, but that shows you how high a regard Sebastian Aho is held in.

Question for Cardiac Cane readers: What do you think makes Sebastian so dominant?

Next: How the Big Rig Drove the Canes to Win
Load Comments
Event Tickets
Powered by StubHub
Top Stories