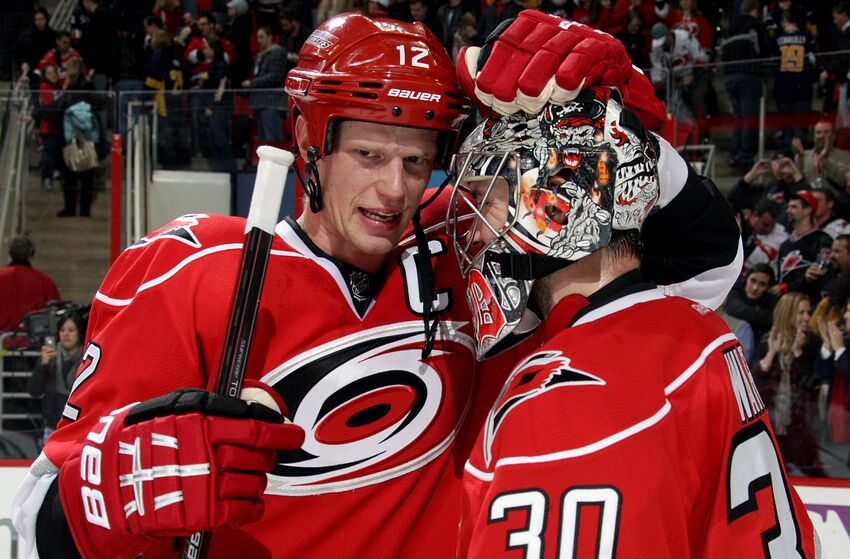 RALEIGH, NC - JANUARY 24: Eric Staal #12 of the Carolina Hurricanes congratulates Cam Ward #30 following a victory over the Buffalo Sabres during an NHL game at PNC Arena on January 24, 2013. (Photo by Gregg Forwerck/NHLI via Getty Images)

With numbers 2 (Glen Wesley), 10 (Ron Francis) and 17 (Rod Brind’Amour) all already hang from the rafters in Raleigh, should the Hurricanes add more?

With a host of former Hurricanes retiring in this previous offseason, including Stanley Cup winners like Matt Cullen and Cam Ward, is it time for Carolina to consider adding another number to Ron Francis, Rod Brind’amour and Glen Wesley?

To qualify for this, I’m going to only include players who have made their names in Carolina, who are remembered for being Hurricanes. Players like Alexander Semin will not be included for more than obvious reasons.

When you think of Carolina’s only Stanley Cup win in 2006, there are two players for me who come to mind. Eric Staal and Cam Ward. Eric Staal is second in Hurricanes franchise history (including Hartford) in goals, assists and points. He sits behind Ron Francis only in all three stats. Eric Staal is the only Hurricane to have a 100 point season after the 2005 season lost to lockout. Number 12 hasn’t been warn since Staal left.

Cam Ward holds the only Conn Smythe in Carolina Hurricanes history. He won his first six playoff series, and was arguably the only reason the Canes were competitive in some of the down years. Ward sits 23rd all time in wins, he holds the Canes records for Wins, shutouts, saves and shots faced. Number 30 is still previously worn only by Ward.

Related Story: Should Cam Ward return to the Hurricanes as a member of staff?

Tim Gleason was not a Carolina draft pick. He was not a household name, but he was a Carolina Hurricane for the better part of a decade. His number 6 is currently being worn by Joel Edumdson. However, I doubt you will find anything Joel does that compares to Gleason in Game Seven against New Jersey in 2009, the shock at the rock. Holding the puck in from his knees, playing a perfect saucer pass to Pitkanen who goes round to Jokinen.

This one isn’t such a common thought, but this man was traded and brought back by the organisation. He won a cup with Carolina, he is a top 10 Cane all time in points, and Erik Cole currently holds a position with the Hurricanes front office, and number 26 retired as a Hurricane. Is there a chance we see 26 with his old line mate Rod Brind’Amour hanging from the rafters in PNC Arena?

There are probably more names that could accompany the three that are currently held in such high regard at PNC Arena already, however in the essence of not wanting to go through all the teams that could have been, I will stop here and allow you to have your say.

Question to Cardiac Cane readers: What numbers do you think should hang from the PNC Arena rafters and why? Is there anyone else I should have included?