When it comes to defense, Carolina Hurricanes’ Jordan Staal is one of the best forwards in the league.  The national media, especially those that vote for the Selke trophy, seem to think otherwise.  In fact, Staal hasn’t even once been a finalist for the trophy despite his superb defensive skills.  Small market bias?  Just look at recent Selke winners.  Every single one of them was in a major market: Boston, L. A., Chicago.  Coincidence?  I think not.  Despite Staal having similar numbers in terms of shot suppression and points this year, he once again isn’t getting a lot of consideration for the Selke trophy.  This year, though, Jordan Staal absolutely deserves to be a finalist for the trophy if not win it outright.

A look at Jordan Staal’s effect on Opponent’s shots 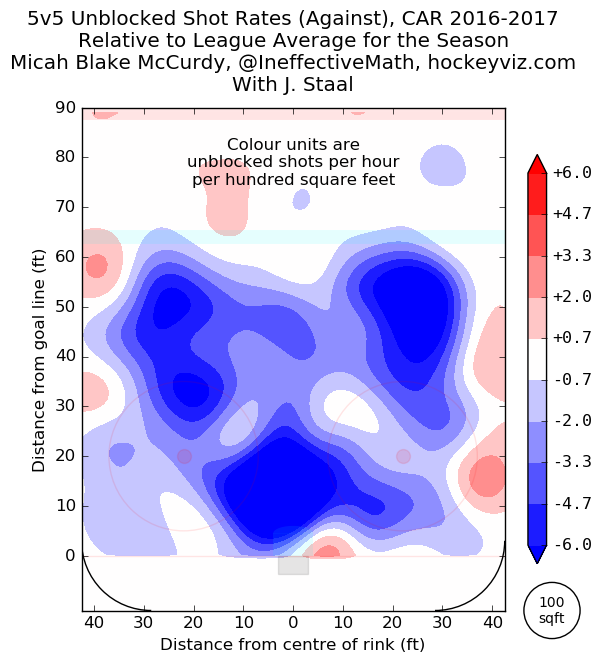 The blue on this chart represents the amount opponents shoot less than the league average.  As you can see, when Jordan Staal is on the ice opponents shoot much less than league average at just about every place on the ice.  Especially in front of the net which is one of the center’s main areas of defensive responsibility.  Compare this to Staal’s probably biggest competitor for the Selke this year Patrice Bergeron. 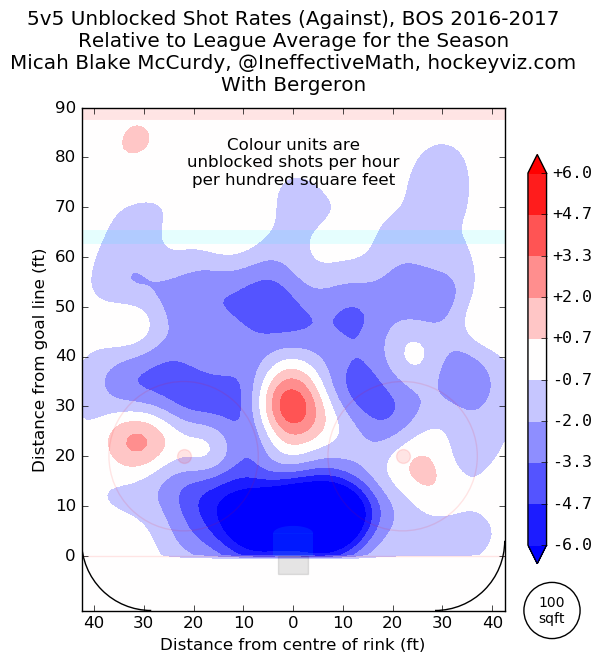 Even though Patrice Bergeron is really good at suppressing opponent’s shots, you can see a big red blob in the high slot on the ice.  Some would consider this on the edge of the High Danger zone in terms of shot location.  Bergeron is on the ice when these shots are being taken shows that there is some sort of defensive breakdown at least at the team level.

Looking at Staal’s case by the Stats:

Staal’s stats are comparable to the rest of the group and are second only to Bergeron in most aspects.  These other three players are considered some of the best defensive forwards in the league.  And Jordan Staal’s stats, while nice, are nothing dazzling; he isn’t blowing away the competition.  And that would be correct, to an extent.  The thing is though these stats need to be

taken in with a little bit of context.

That context is the quality of teammates that each player plays with.  Patrice Bergeron has David Pastrnak and Brad Marchand on his wing.  Anze Kopitar has Jeff Carter.  Jonathan Toews has Marian Hossa probably one of the best defensive wingers in his own right.

Let’s look at some of Jordan Staal’s past linemates this year: Joakim Nordstrom, Brock McGinn, Andrej Nestrasil, and Elias Lindholm.  While none of those players are terrible, I wouldn’t consider any of them close to the level of talent as those wingers named above.  That’s what makes Jordan Staal’s numbers so special.

Not only is he playing at a comparable level to some of the best defensive players in the league, he is doing it with a far lesser quality of teammates.  Imagine what he could do with the likes of a Carter or a Pastrnak on his wing.  I think Carolina Hurricanes’ fans saw a taste of that when Staal centered a line with Teravainen and Sebastian Aho.

Will Jordan Staal win the Selke?  No, he most likely will not.  But to say that he doesn’t deserve to be in the conversation is just another case of analysts being biased against small market teams.