With a 14-1-1 record in their last 16 home games, the Carolina Hurricanes are starting to see their attendance improve

The Carolina Hurricanes are halfway through their home schedule and it’s time we look at attendance thus far.  Missing the playoffs for seven straight seasons has taken a toll on the Carolina fanbase. They are in the midst of their worst yearly average attendance since the 1998-99 season. Attendance has trended down in the three years since general manager Ron Francis took over and announced he was taking the team into a full rebuild.  This is no surprise to anyone.

In the same way that the team rebuilds, the fanbase needs to rebuild as well.  One thing to consider when looking at attendance is fanbases are a separate entity from the team.  The fans and the team follow a similar trend when it comes to attendance and team performance.  However, that is not always the case.  It’s also important to look at the past and present before we can determine what the future is for the Hurricanes.

Where we come from

Contrary to popular opinion, the Hurricanes are in a good hockey market.  No, it’s not Toronto or Edmonton where people will show up to watch hockey no matter how good it is.  However, it is a city where people enjoy sports and will spend their money on the team if the team puts out a good product.  It’s important to recognize that in eleven of the Canes nineteen seasons, they averaged over 15,000 people a game. 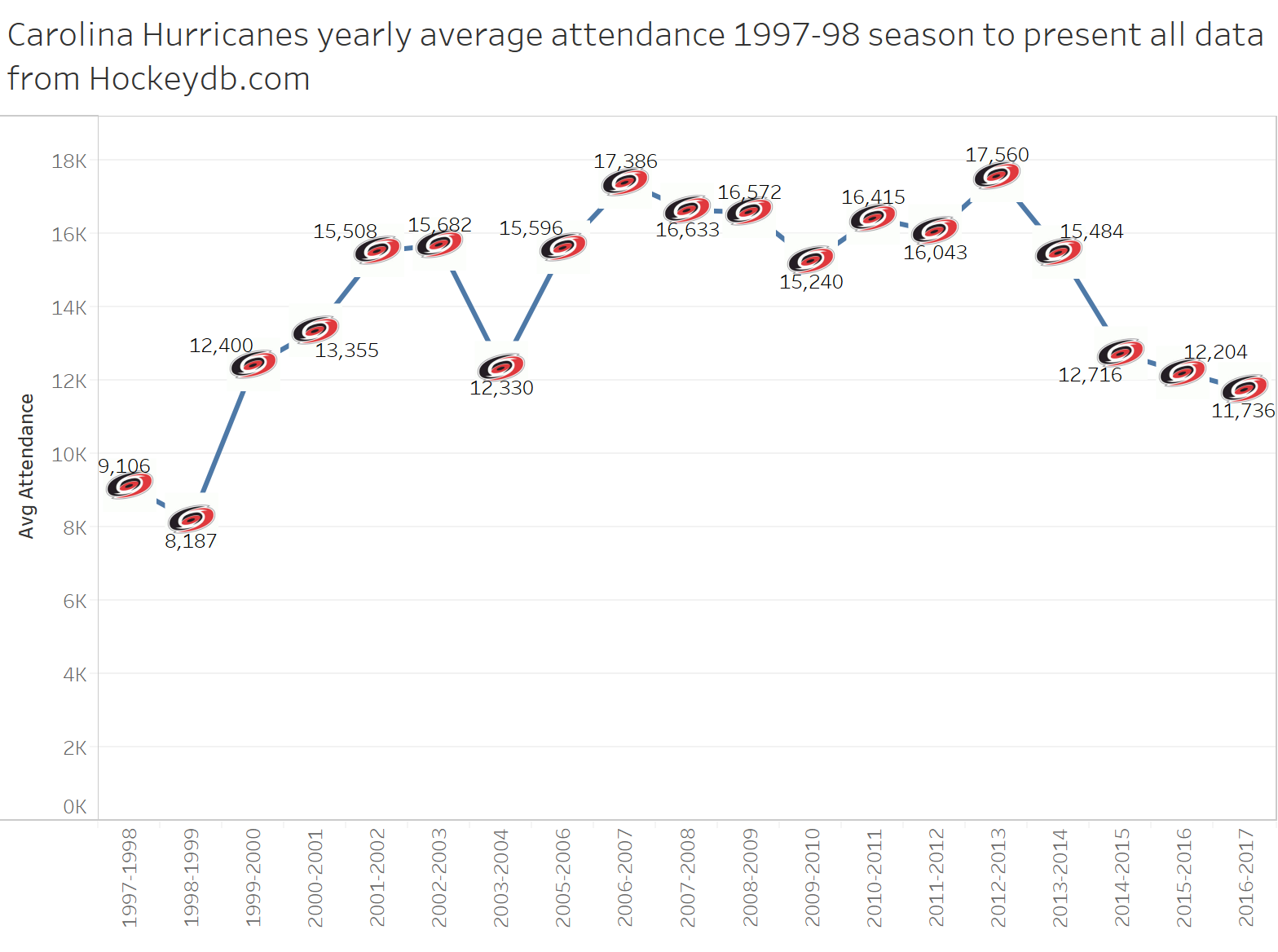 Attendance hit its first peak for the Canes the year after they won the cup.  After that, you can see that there is a good amount of support for the team in the Raleigh, Durham, and Chapel Hill area.  The Hurricanes have only made the playoffs once since then and Caniacs didn’t give up. The fanbase stuck with the team through some tough times filled with false hopes of making the playoffs again.  Over the past couple of years, though, the team openly communicated about their rebuild and it has seriously hurt the attendance numbers.

Where we are now

As I mentioned above, the Hurricanes are experiencing their worst attendance since the 1998-99 season.  Those figures aren’t the whole picture.  There are several factors that attribute to the low attendance this year; some are concerning and some give plenty of reason for hope.

When comparing past attendance to present, one cannot ignore the large quantity of tickets the franchise used to give away.  While it made the crowd look full, it also propped up attendance in a way that didn’t represent the fan base.  Since management stopped giving away tickets, attendance took a hit, but now we can see the true core of the fanbase.  In a playoff drought like we’re experiencing, casual fans will not stick around.  Much like a franchise rebuild, a fanbase rebuild should start with understanding what the core is.  Management is working on building the core of season ticket holders and it is promising that the Canes averaged over 11,000 in attendance this year despite last year’s results.  Now with the team’s improved performance, the core of the fan base will start to grow. 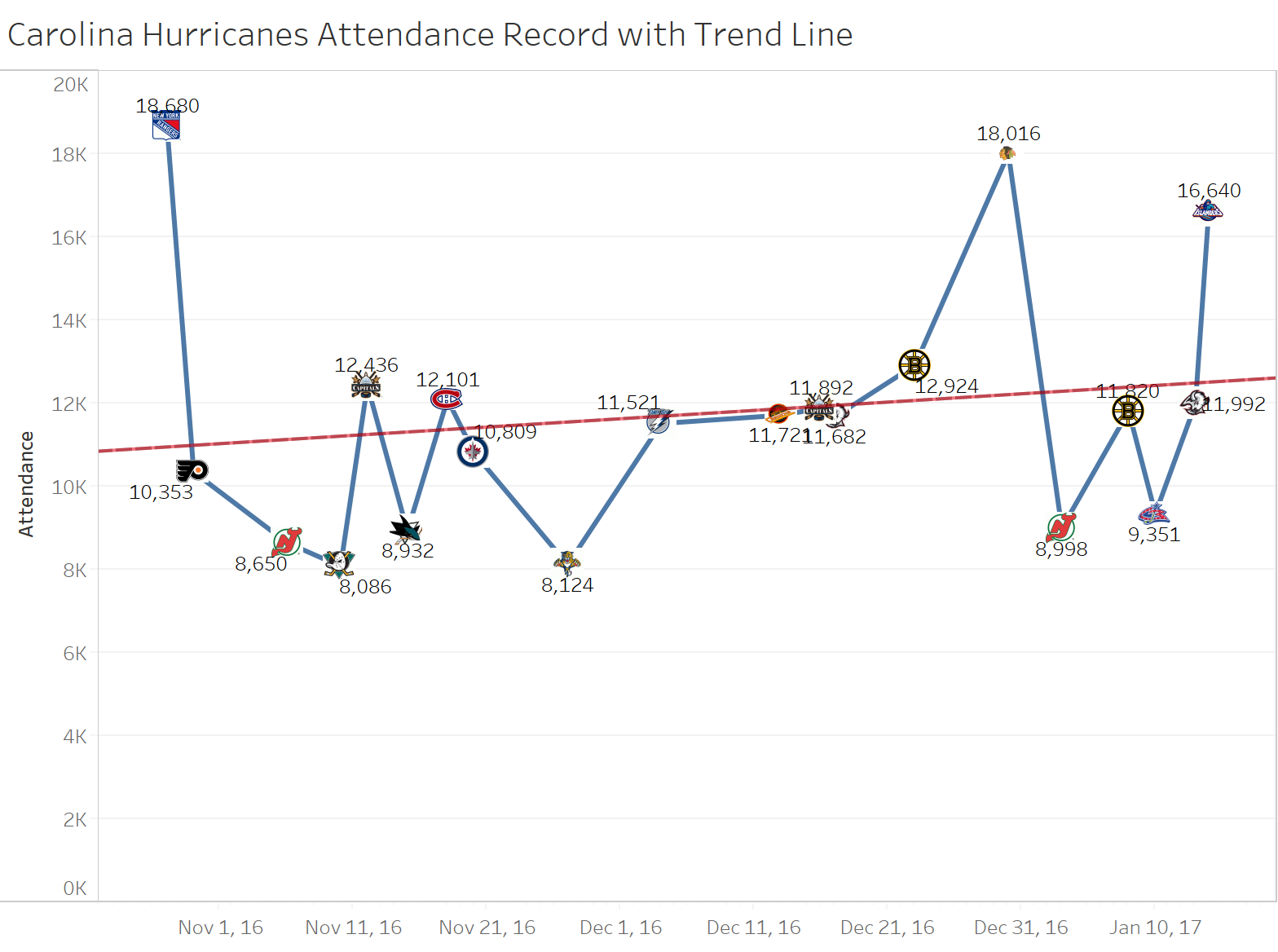 As you can see, the graph shows there is a slight upward trend in attendance. This is promising, as it means people are responding to the team’s performance. However, attendance does not correlate directly to a single game. This is why we did not see a steady rise in attendance during the Canes five-game win streak earlier this season.

Attendance responds to a product as a whole.  The Hurricanes have performed well over the season, and the community is starting to support the team again.  Over the past sixteen home games, the Hurricanes are 14-1-1 and the community is noticing.  It’s a slow process growing the core of the fanbase, but it’s starting to trend in the right direction.

Where are we going

For now, it looks like the attendance problems have bottomed out and can’t go anywhere but up.  With the upward trend in this year’s attendance, that looks like the case.  For the whole season thus far, the average attendance is 11,736.  However, if you look at the past eleven home games the average is 12,414.  Attendance has only fallen below 10,000 twice over that span and both were Tuesday night games. What’s even more promising is that over the last seven games, attendance has averaged 12,820 which is better than the past two seasons.  The Hurricanes performance at home and the fact that they are in a position to make a push for the postseason has fans starting returning to PNC Arena again.

Next: The Best Hurricanes Links From Last Week

After a weekend where crowds of 11,992 and 16,640 saw the Canes come away with big wins, attendance should continue to rise.  The Hurricanes do not play at home again until Friday against the Penguins, but three days out and it’s already looking like it will be a full house.

It's shaping up to be a good crowd on Friday when the @NHLCanes host the @penguins. #PackThePNC #Redvolution pic.twitter.com/b4AgjTFFv9

Attendance growth is much like the snowball effect.  As more people see the Hurricanes play well, they will want to come back and bring more people with them. It’s a slow progression but this is how fanbases grow.  The Hurricanes are rebuilding the right way and will be good for a long time. This will be true of the fanbase as well and Hurricanes games will soon be one of the hottest attractions in town.