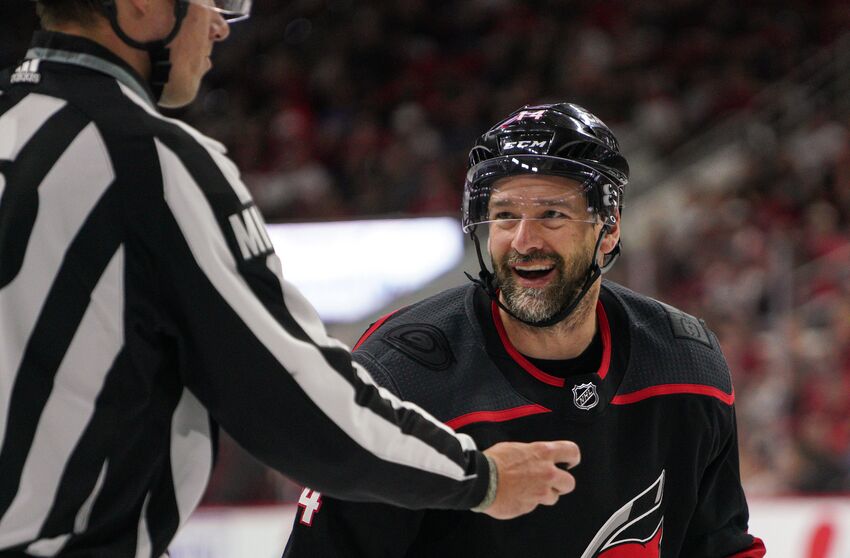 RALEIGH, NC - MAY 03: Carolina Hurricanes right wing Justin Williams (14) laughs after being thrown out of the face-off circle during a game between the Carolina Hurricanes and the New York Islanders on March 3, 2019 at the PNC Arena in Raleigh, NC. (Photo by Greg Thompson/Icon Sportswire via Getty Images)

Welcome to 2020, the year Carolina Hurricanes fans waited for the return of Justin Williams. When the game of his arrival comes, should he become Captain of the team again?

I say no. Williams does not need a letter on his jersey to lead the Carolina Hurricanes, he can lead the team just by entering the room.

During the summer of 2019, Justin Williams announced he was taking a break from hockey. Now that he is rested, Williams is ready to help push the Carolina Hurricanes back to the playoffs and once again push for Stanley Cup glory.

There is no doubt in my mind that Jordan Staal would hand over his Captaincy to Williams without even blinking an eye. He is respected by any team he laced up the skates for, just ask the LA Kings. Should Staal automatically hand over his C to Williams? Absolutely not!

Justins Williams’ hockey accomplishments would make an interesting book. He won the Stanley Cup three times; once with Carolina Hurricanes and twice with the LA Kings. He won the Conn Smythe Trophy in 2014, and earned the nickname Mr. Game Seven for his playoff heroics.

This alone should warrant reasons for Williams to wear the C;  these reasons also prove Williams doesn’t need to wear the C. No matter who you are in the Carolina Hurricanes locker room, you are going to listen to him.

Martin Necas, Andrei Svechinkov, and Sebastian Aho will all look up to Williams to help them grow as players. They will look at Williams’ track record and know he understands what it takes to not only reach the playoffs, but make a deep playoff run.

Older players like Jordan Martinook and Jordan Staal have another player to help them rejuvenate the team when they are searching for what needs to be say. We all know how to be motivated during times of great success. It takes a leader to motivate the room when the outcome looks bleak.

Welcome to Justin Williams Watch! Here is where Carolina Hurricanes fans look at each practice and game day line-up to see Williams’ location. Everyone can speculate when he will be game ready, but he knows himself better than we do.

Justin Williams needs to become game day ready. He knows his body. He will alert head coach Rod Brind’amour when he is available to play the game. Take a moment to think about what this decision does to who is captain of the team.

Does it mean Williams will only be the captain at practice and Staal at games? Do we wonder who will wear the C if Williams is a game day decision?

For now, it is better to leave the captaincy to Staal and let Williams be another voice in the locker room.