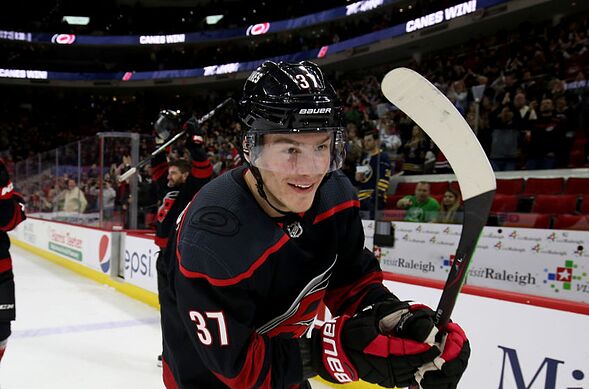 RALEIGH, NC – MARCH 16: Andrei Svechnikov #37 of the Carolina Hurricanes celebrates after defeating the Buffalo Sabres during an NHL game on March 16, 2019 at PNC Arena in Raleigh, North Carolina. (Photo by Gregg Forwerck/NHLI via Getty Images)

The Carolina Hurricanes head north to Buffalo tonight to take on the Sabres; here is what they need to do to ensure the beginning of a winning streak.

The Buffalo Sabres are having yet another rocky start to their season, but if we are to learn anything from the Ottawa Senators, they are not to be taken lightly (especially at home).

The Buffalo Sabres’ record currently stands at 9-6-2, giving them 20 points in the standings; just one point and three spots behind the Carolina Hurricanes. The Buffalo Sabres have lost six of their last seven games, but they still should not be underestimated.

Speaking of Jeff Skinner, he is currently on a bit of a cold streak; after scoring six goals in his first 10 games, Skinner has now slid back to one goal and a -7 +/- rating in his last seven games.

The Canes’ record is currently 10-7-1, giving them 21 points in the standings, securing their spot at 16th in the league. This was a significant drop from Top 5 in the standings after their hot start, but the Canes can start putting together a winning streak tonight that could pull them back to at least the Top 10 if they acquire enough points over the next week or so.

The Carolina Hurricanes have it in them to pull out a win tonight, especially while riding the momentum of their recent 8-2 victory over the Ottawa Senators. The last road trip the Canes’ embarked on wasn’t so great. The three things they need to do to make this one better are score early, convert on the powerplay, and they absolutely need consistency from our goaltenders (as well as play Haydn Fleury; more on that later).

Next: 1. Score Early
Next1 of 4Prev post
Use your ← → (arrows) to browse
Load Comments
Event Tickets
Powered by StubHub
Top Stories