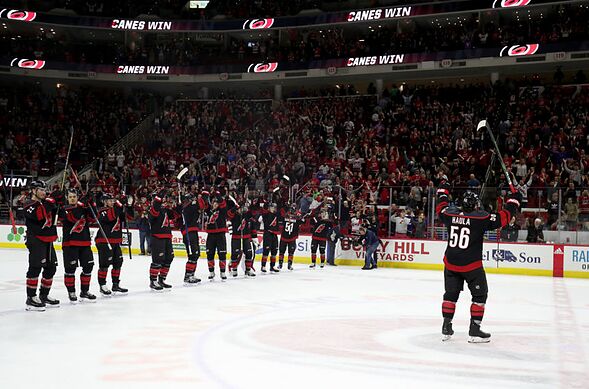 RALEIGH, NC – OCTOBER 11: Erik Haula #56 of the Carolina Hurricanes leads teammates in a Storm Squad following a victory over the New York Islanders during an NHL game on October 11, 2019 at PNC Arena in Raleigh North Carolina. (Photo by Gregg Forwerck/NHLI via Getty Images)

With the Carolina Hurricanes off to the best start in franchise history, let us take a moment to recognize some players who have loomed large early on.

The dawning of a new NHL season brought heightened expectations to Raleigh.  Rewarding the faith of their fanbase, the Carolina Hurricanes hit the ground (ehm, ice) running, winning their first five games and six out of their first nine.

Things haven’t gone without trouble, as familiar bugaboos (poor passing, flaccid power play) have reared their heads at times.  Thankfully, there has been plenty of good to offset the bad.  Where the power play has fallen off a cliff, the penalty kill has improved from the first week of the season.

The offseason additions that general manager Don Waddell brought in have integrated well with Rod Brind’Amour‘s system.  The goaltending tandem of Petr Mrazek and James Reimer have, for the most part, been solid.  Rookie Martin Necas, following a bland preseason, has posted two goals and three assists and he’s looked good doing it.

And, let us not forget, defenseman Haydn Fleury notched his first NHL goal:

CONGRATS to @fleury96, who notched his first career NHL goal on this beut.#LetsGoCanes pic.twitter.com/w8eFasM5vK

So, let’s forget about that California trip (except for Fleury’s first!) and take a look at three players who have been invaluable to the Hurricanes’ early success.