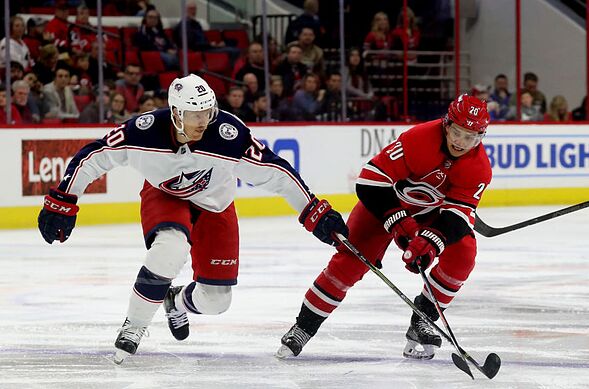 RALEIGH, NC – NOVEMBER 17: Sebastian Aho #20 of the Carolina Hurricanes and Riley Nash #20 of the Columbus Blue Jackets battle to control the puck during an NHL game on November 17, 2018 at PNC Arena in Raleigh, North Carolina. (Photo by Gregg Forwerck/NHLI via Getty Images)

It’s been more than a week since the home opener against the Montreal Canadiens. Ever since, the Carolina Hurricanes have won every single game, can they continue this success against the Columbus Blue Jackets?

It is astonishing to think that 9 days ago, the home opener against the Montreal Canadiens was the buzz. Now, the Hurricanes have went through three thrillers of games that went to extra time and two comfortable wins this week.

The game yesterday against the New York Islanders could’ve been a trap. The Islanders have been struggling and the Hurricanes have been rolling, that’s usually when a bad team beats a good team because of desperation and eagerness to get back into competition in the division.

With a team under Rod Brind’Amour, we can probably expect no cockiness from the Hurricanes. That, however, does not mean that the Hurricanes are not playing with confidence, they are playing with tons of it. Adding the win over the Islanders, this start to the season is the best season start in franchise history, 5-0-0, overtaking the previous record of 4-0-0 from the 1995-1996 Hartford Whalers.

The Hurricanes unfortunately (for them, not us, cause watching hockey is fun) have back-to-back games, which could hinder their best performance out on the ice. The Columbus Blue Jackets are in town and are in a situation the Islanders were in. A team not doing so well, looking to finally get a needed win.

The Columbus Blue Jackets are hungry. What can the Carolina Hurricanes do to send Columbus back home, just like they did to New York?

Next: 1. Recover from Special Teams Hangover
Next1 of 4Prev post
Use your ← → (arrows) to browse
Load Comments
Event Tickets
Powered by StubHub
Top Stories